Dalyce is a born entertainer.  Her first public performance was in kindergarten.  She raised her hand to go the restroom and when she didn’t come back,  Mrs. Van Roekel  found her in the bathroom.  The door creaked open,  ”‘Dalyce, what are you doing?” She was just sitting on the throne singing her heart out.  “Singing!”

Today Dalyce would be one of those kid stars on Youtube. 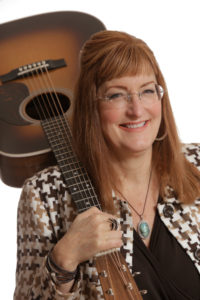 She got a ukulele from Santa that year and played and sang at every opportunity especially at church.   Well, not the ukulele  They never missed a church service at the Dykhouse house.  Dalyce attributes her musical foundation to playing and singing hymns.

Off to college studying voice at the University of South Dakota, she discovered rock & roll and was well on her way to fortune and fame in The Tracterz and Lip Service opening for Huey Lewis,  the Violent Femmes, Bow, Wow, Wow and many  more.  As a member Hot Rod Chevy Kevy she was inducted into the Iowa Rock n Roll Hall of Fame.

“I met my husband, Michael on the road with a national touring group.   He pursued me for a couple years before I finally gave up my dreams of fortune and fame for marital bliss.”, says Sellers. “He’s a great guy!”

For the next 30 years in Dallas (Texas) and Bozeman, MT, Dalyce was involved in  church music and played in a contemporary Christian praise band called ‘Forgiven’ and recorded two CD’s.   She still plays for her church and still loves to play hymns.

In 2012 Michael and Dalyce moved to Wyoming to manage a ranch.  “I didn’t have a 40 hour per week job for the first time in my life so I decided to pick up the guitar again and began attending local music gatherings.  Then I met Gordy.  I couldn’t have found a better partner and we hit it off immediately.  Since February 2017 we have had our noses to the grindstone crafting many different shows.  It’s been a hoot, and I wouldn’t trade it for the world!”

“My goal is to play as much good music for as many good people as I can and have a good time doing it.”